I’ve started working on a side project this year and the tech stack I have chosen was the Elixir lang due to its functional design and fault tolerance (Thanks to the Erlang VM) so the Phoenix framework was a natural choice for me.

While Phoenix provides a very interesting programming model called LiveView, I wanted to stick with the frontend stack I’m most familiar with which is React. Besides using it heavily in my day job, I also really appreciate the ecosystem around it.

If you are a savvy Elixir engineer and just want to see the code, here is the Github repo ready for you. Feel free to leave a Github star so folks can find this template more easily.

I wanted to come up with a solid Phoenix project where I can get all the benefits from Elixir and Phoenix itself, but also be flexible enough by not coupling my React frontend with Phoenix. My requirements were:

With the clear requirements defined above, I managed to make them all work by combining Phoenix and Vite. So let’s get our hands dirty, write some code and make this project work!

This guide assumes that you are already familiar with Elixir, Phoenix and a frontend framework like React, so we skip a few basic concepts and jump straight in. Although, I will be linking some important resources to guide you in case you are just starting with this stack.

First of, make sure you have the following dependencies installed:

Now let’s head to our terminal and create our Phoenix app:

Once your project is react, cd into it and fire up the Phoenix server:

Now you should be able to access your Phoenix app at localhost:4000 and see a page like the following:

Awesome! We have got our Phoenix app up and running. Let’s bootstrap our React app in an independent directory.

Creating our React with TypeScript project

For our React frontend, I’ve chosen Vite to handle all the tooling for me. It has got all the sane defaults I need for a TypeScript project with React, plus it uses ESBuild which gives us blazing fast feedback during development.

To kick things off, leave the Phoenix server running and open up a new terminal window. Still within the Phoenix directory in your terminal, let’s use the Vite CLI to create our React project:

This should create our React project under the frontend directory. Let’s install all dependencies and start our Vite dev server:

Now head to your browser at localhost:3000, you should see our React app up and running! 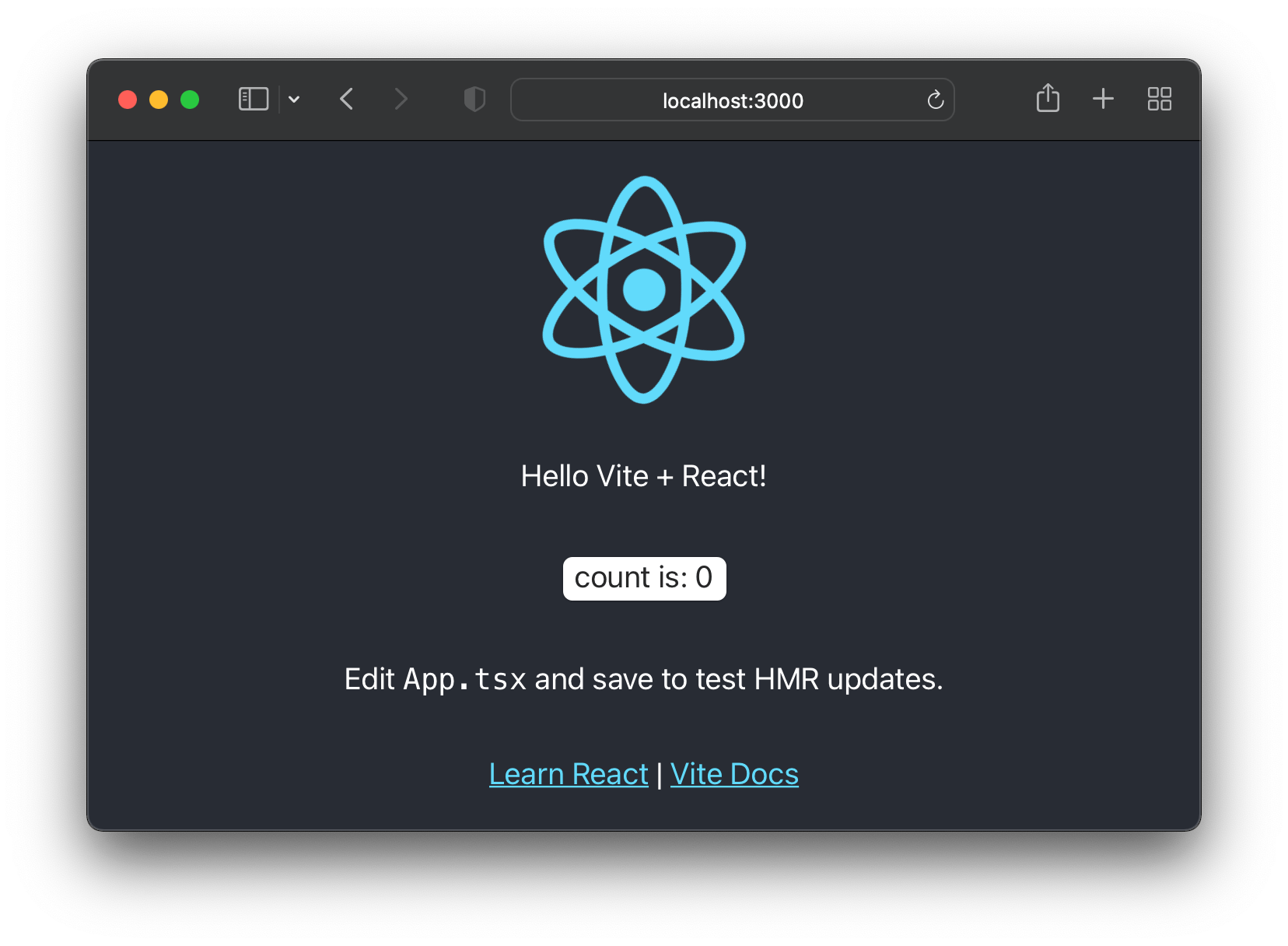 Adding routes to our React app

There is a major difference between Phoenix routes and React routes:

So the strategy here is to leverage React Router on our React app for any route that is under /app and whenever the client makes the first request to our app, let’s say they are visiting example.com/app for the first time, Phoenix will handle this initial request and serve the initial HTML together with our React app payload, so the React app can be mounted and take care of the routing from there.

To make sure that client-side route changes are working, let’s add a very basic routing component so we can test if our react app is working. Let’s start by installing React Router in our React app. Stop the dev server and execute the following:

Now open up your favorite text editor and edit our React app file at phoenix_react/frontend/src/App.tsx with the following components:

Now you should be able to visit localhost:3000/app and see a screen similar to the following: 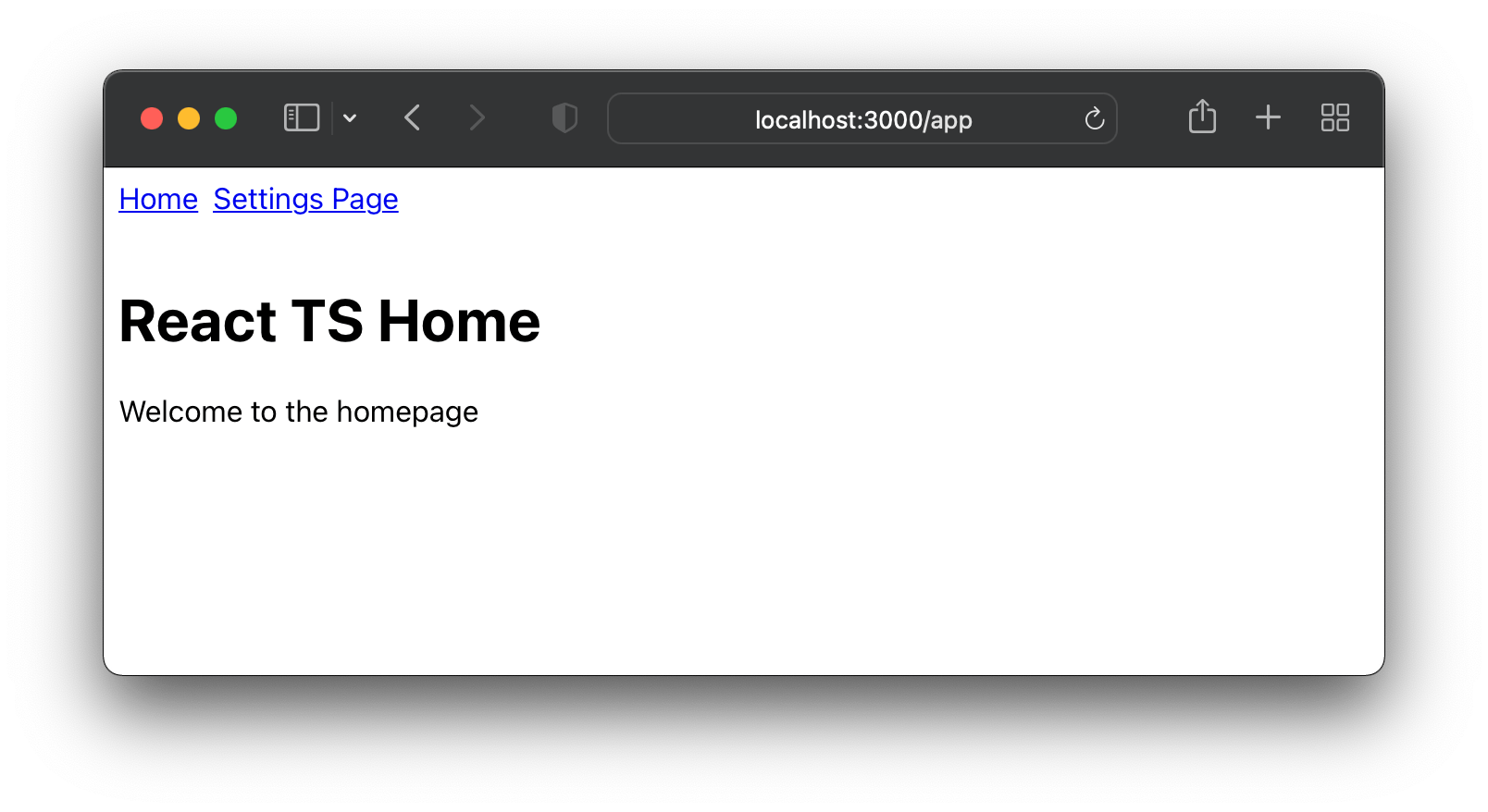 Try to click around the Home and Settings Page links at the top. Notice that it transitions between pages instantly. If you check your Phoenix console, you notice that no requests have been fired to your backend. So far so good.

Also notice that we now access our React app via the /app route. This is important and plays a major role when we bundle our application for production and serve it from Phoenix. We are using a small hook to check whether our app was mounted to the / path and redirect to the base path. This is only relevant for development. In production, Phoenix will make sure that the user is always in the /app when using our React app.

Serving our React frontend from Phoenix

So far, Phoenix has no clue about our React app. We need to come up with a way to tell Phoenix how to serve our React app once it’s bundled and ready to be served as a SPA. For that to work, we can do the following:

Creating a custom mix task to do the job

To manage point 1 and 2 from the previous section, we can create a custom mix task that can execute all the TypeScript bundling via NPM and coping files around to make our React app ready to be served by Phoenix.

Our custom mix task will make sure that:

The /priv/static/webapp path will be picked up by Phoenix later on, but make sure that you add it to your .gitignore file. We don’t want to commit our frontend production bundles.

Let’s go ahead and create lib/mix/tasks/webapp.ex with the following Elixir code:

Using the System module, we can interact directly with our host system, so we can issue shell commands when invoking our custom mix task.

Let’s try it out. Stop your Phoenix server and execute the following command:

Our frontend is ready to be served by Phoenix now. But there is one little change we have to make to our Vite configuration so our Frontend static assets can be delivered.

Making the webapp base path discoverable

We want that to happen, but for our web app, static resources will be under the /webapp/ path. Luckily, this is extremely simple.

Vite base path for production

Since we want to serve our Web app from priv/static/webapp, we have to make sure that during our production build, Vite should append the /webapp/ base path to all our resources. This is paramount for our app to work.

Vite provides a specific configuration entry for that. Let’s go ahead and edit our frontend/vite.config.ts file with the following:

Now execute our custom mix task again from within our Phoenix project:

Once this is done, take a look at the priv/static/webapp/index.html contents. We should see an HTML similar to the following:

Notice that all URLs there have the /webapp/ base path prepended. That is very neat. Our Frontend is ready to be served by Phoenix.

Phoenix is still unaware of our webapp static folder. We must add that to our endpoint configuration so our Plug.Static can serve it. Head to lib/phoenix_react_web/endpoint.ex at line 23. Add the webapp to the string list:

With that tiny change, Phoenix is now able to serve the static assets generated by Vite.

We now have a fully functional frontend and our Phoenix backend is able to deliver its static assets like JavaScript and CSS files. But to make it really feel native to our platform, we must be able to visit example.com/app or any other route under /app and our React app must be able to mount all its components based on the given route.

For that to work, we must deliver the initial index.html that was generated by Vite whenever someone visits /app/*. We need a custom Phoenix controller. Let’s build that now.

Create a new controller at lib/phoenix_react_web/controllers/webapp_controller.ex with the following module:

We now have a controller that can serve our index.html file, but we need to configure a route that will hit this newly created index function. Let’s add the following scope to our Phoenix router:

Awesome! Let’s try this out. Make sure that your Vite dev server is stopped and start your Phoenix server with mix phx.server and go to localhost:4000/app. You should see the exact same result that we had when our Vite dev server was running!

Try to click through the header links. It should be all client-side routing. The ultimate test is to type in the url localhost:4000/app/settings, hit enter and see what happens.

Notice that the /app/settings page will be displayed as we expected. Behind the scenes, Phoenix kept delivering the index.html file and the React Router made sure that the right components were mounted. Sweet! Our Phoenix and React apps are ready to roll!

If you have been developing frontend apps that talk to an external API, I’m quite confident that you have faced a bunch of CORS issues. For those that are not familiar with, whenever you open up an app at myapp.com and that same app needs to call an API at myapi.com the browser prevents that by default.

Actually, the browser will issue an OPTIONS request to check if myapi.com allows requests coming from myapp.com to be answered. This is a very interesting security mechanism and I’m glad it’s there. If you want to learn more about it, Jake Archibald wrote an awesome blogpost about it with all the information you need to know.

Luckily, Vite saves the day again by providing us with the server proxy configuration. Head over to the frontend/vite.config.ts and add the server entry to your config:

From now on, if you are making requests with axios for instance, you can safely make a request in your React component like this:

The request to /api/todos should be forwarded to your Phoenix backend and as long as you have a route and a controller to respond to that, API requests will be served just fine.

Authentication via http-only Cookies will also just work without any extra setup since everything is under the same domain. (localhost during development and myapp.com in production)

We have got everything setup now and the cherry on top is to generate the Elixir release with our production Phoenix app.

The major advantage of an Elixir Release is that it creates a single package including the Erlang VM, Elixir and all of your code and dependencies. The generated package can be placed into any machine without any preconfigured dependency. It works similarly like Go binaries that you just download and execute.

But before we generate our release, since we are testing the build locally, we need to change the port configuration since our runtime configuration is binding to 443 by default. Let’s quickly change that at config/runtime.exs:

With that out of the way, execute the following commands to generate the release:

We now have our production release ready. Let’s fire it up with the following command:

Great! Now our Phoenix app is running in production mode. Now head to your browser and open localhost:4000/app. You should see our React app being rendered!

We have finally succeeded with our Phoenix + React + TypeScript setup. It provides us with a great developer experience while simplifying our production builds by bundling our Phoenix app together with our React app.

While that might have been a tiny bit complex to setup, I believe it is still worth it to keep your SPA decoupled from your backend. Here is a list with a few bonus point of this setup:

I personally believe that the development and deployment of our applications should be simple and while having React as a dependency does increase complexity into our app, the trade-off of building web apps with it pays off in my case. Although, if you have simple CRUD apps, sticking with vanilla Phoenix templates and LiveView might be more than enough.

You can find the repo with all the changes we made on this post here.